Home > About the Journal 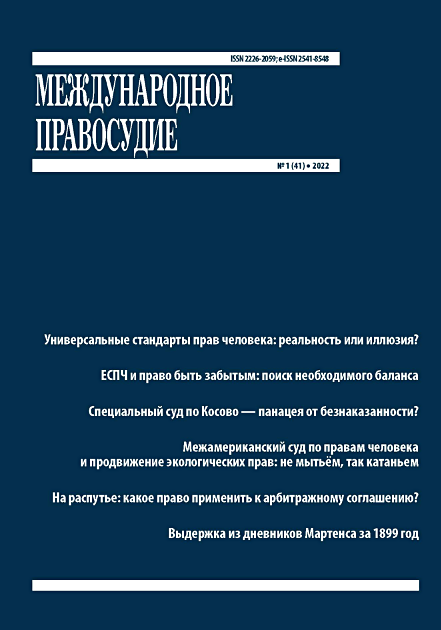 International Justice (Meždunarodnoe pravosudie) is a new Russian language law journal, established by the Institute for Law and Public Policy’s experts group in 2011. Its goal is doctrinal analysis of the international judicial mechanisms, including their institutional framework and case-law.

The journal aims at maintaining a fruitful and informative discussion of the international judicial institutions work, as the institutions are capable of making the contribution to the theory and practice of international law. The discussion is lead in Russian, which is one of the most underused official languages of the United Nations. The emphasis is made on the comparative analysis of the case-law of two and more international courts and tribunals that operate in the same international law areas, such as regional human rights courts, UN treaty bodies and international and hybrid criminal tribunals.

Since 1 December 2015 by the Higher Attestation Commission of the Ministry of Education of the Russian Federation decision, the journal was included in the List of leading reviewed scientific journals and publications, which should be published in the main scientific results of dissertations on competition of a scientific degree of doctor and candidate of Legal Studies.

The journal also includes materials on educational projects in the field of international law and relevant student moot court competitions.

The Journal is divided into four sections: PRAXIS – SCRIPTORIUM – PERSONALIA – ACADEMIA. Special issues may also include such sections as SIMPOSIUM and TRIBUNA.

PERSONALIA section contains the interviews with prominent scholars and practitioners. The section may also comprise academic reviews and the excerpts from legal classics (reprinted).

The Journal appeals to practicing lawyers, teachers and students. It will be particularly useful for judges and other judicial officials.

The journal is also distributed in electronic form by email subscription.

Information about the public registration of the periodical

Published with the financial support of: