Home > IJ № 2 (42) 2022 > State consent to its treaty obligations: the gap between international and national law

State consent to its treaty obligations: the gap between international and national law 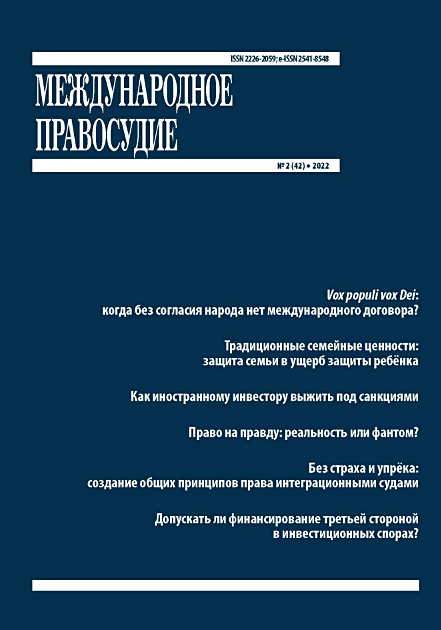 The article addresses the question of the nature and degree of relevance of national law provisions when a state expresses its consent to be bound by an international treaty. Although this problem goes back to the origins of constitutionalism, its relevance has been growing dynamically recently. In trying to protect their sovereignty, states have been cautious about the conditions and procedures governing the transfer of powers to the international level, especially in the most sensitive political, economic and financial spheres. The basic constitutional principles of separation of powers and democracy are expressed in the distribution of authority at the national level between various government bodies when concluding international treaties, and also are expressed in certain cases in the direct engagement of citizens. Article 46 of the Vienna Convention on the Law of Treaties attempts to strike a fair balance between state sovereignty and the security of treaties. However, in practice this provision has not been widely applied, for reasons including the restrictive interpretation. Providing extensive examples of national legislation (including that of Russia), the article demonstrates that the principles of public governance permeate the sphere of international relations of states and limit the sole authority of the executive branch to express the consent to be bound by an international treaty. Given this, an attempt has been made to prove that states, in their relations with one another, must take a higher standard of diligence than that in restrictive interpretations of Article 46 of the Vienna Convention when assessing the fulfillment by the other state of its requirements under domestic law for the expression of consent to be bound by an international treaty.

Davis W.B.E. (2009) The Importance of the Due Diligence Investigations: Failed Mergers and Acquisitions of the United States’ Companies. Ankara Bar Review, vol. 2, no. 1, pp. 5–17.