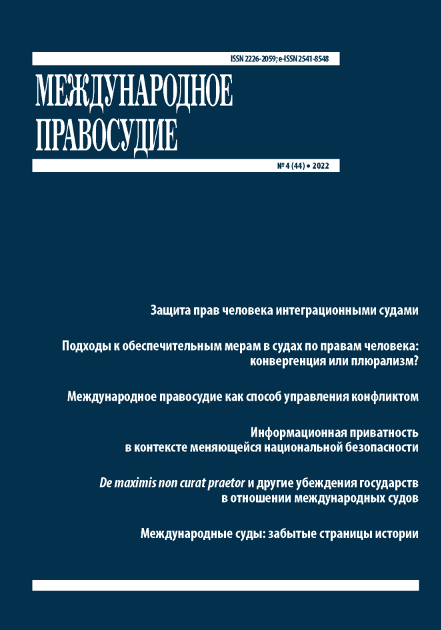 EUROPEAN COURT OF HUMAN RIGHTS: REVIEW OF THE CHAMBER JUDGMENT OF 7 JUNE 2022 IN THE CASE OF TAGANROG LRO AND OTHERS V. RUSSIA (APPLICATIONS NOS. 32401/10 И 19 OTHERS)

In Taganrog LRO and Others v. Russia (applications nos. 32401/10 and 19 others), the European Court of Human Rights examined the complaints of hundreds of Jehovah’s Witnesses’ religious organizations and their individual members regarding the application of the Russian Federation’s anti-extremist legislation against them. In its judgment, the European Court criticized the definitions of “extremism” and “extremist activities” in the Russian law, referring to their overly broad wordings which allow declaring extremist any actions or statements, even those devoid of any hatred or animosity. The European Court also noted that proclamation of the superiority of one’s religion over others’, as well as non-violent calls to convert, are regular aspects of the right to religious freedom. The European Court found that the decisions mandating dissolution of the Jehovah’s Witnesses’ religious organization in Russia were not based on law and deprived their members of the right to practice their religion in community with others and to carry out their religious activities. It also held that Russian courts’ decisions to declare Jehovah’s Witnesses’ religious publications extremist and hold some of their members administratively liable for their dissemination were based on a formalistic approach and in violation of the applicants’ right to impart information. The European Court made similar conclusions about complaints against rescission of the permit for distribution in Russia of magazines published by the German society of the Jehovah’s Witnesses and against blocking access to their international website, noting that the Russian authorities had deprived the applicants of any opportunity to correct the alleged violations. The European Court also found a violation of the right to freedom of religion of those applicants who had been convicted of carrying out or taking part in the activities of an “extremist” organization after the Jehovah’s Witnesses had been banned in Russia, holding that the domestic authorities had de facto deprived the applicants of their right to manifest their religion in community with others. The confiscation of the Jehovah’s Witnesses’ real property and their banned religious publications was found by the Court to violate the right to peaceful enjoyment of private property due to its incompatibility with the lawfulness requirement, while the seizure of other religious literature and personal property of the individual applicants was found to breach Article 1 of Protocol no. 1 due to the lack of any legal grounds for it. Moreover, the European Court decided under Article 46 of the Convention that the respondent State had to discontinue all criminal proceedings instituted against the Jehovah’s Witnesses and release those of them in detention.

PROTECTION OF HUMAN RIGHTS STRICTO SENSU BY THE COURTS OF INTEGRATION ASSOCIATIONS: EXPERIENCE OF COMPARATIVE ANALYSIS

The relevance of this article is due to the growing potential of economic integration organizations, whose competence has gradually grown far beyond pure economic issues, to address the problem of protecting fundamental rights. The reason for the need to develop the panoply of human rights by integration associations is that market freedoms cannot be realized where citizens and entrepreneurs do not feel protected. Therefore there is a need to ensure security and legality within the area covered by an organization of economic integration. The Eurasian Economic Union, whose founding treaty was signed in 2014, is only at the beginning of this path. The realization of its competence in this direction would not only fulfill the potential of this integration project, but also fill the gap formed after the withdrawal of the Russian Federation from the European system of human rights protection. It should be noted that the protection of fundamental rights is much more effectively achieved by integration associations than by intergovernmental cooperation, which is based on the promotion of respect for human rights without any real tools for their protection. The methodology adopted by classic international organizations is called the “discursive method” in this article, since within such organizations human rights are often perceived only as an occasion for didactic discourse. At the same time, in many economic integration organizations there is a court which often plays a significant role in integration building and carries out an evolutionary (and sometimes creative) interpretation of the organization’s law. The scope of this study is deliberately limited to the protection, by courts of integration associations, of human rights stricto sensu, i.e., the protection of those rights that do not directly follow from the integration associations’ founding agreements and are not economic in nature. These rights come to be an organic continuation of the founding agreements and other acts of organization while simultaneously following their own development trajectory.

UNKNOWN “SANCTIONS WAR” AND THE POSSIBILITIES OF INTERNATIONAL JUSTICE

The article examines the judicial strategy chosen and successfully implemented by Qatar for challenging in international courts the unilateral sanctions imposed against it by a group of countries. It notes that instead of one dispute over Qatar’s implementation of the Riyadh Agreements, everything was “sliced” into smaller disputes over various sectoral international agreements, which seems to be the only correct approach, given the current state of international law and international justice. However, this approach also has quite obvious risks because of the possibility of various conflicting judgments. Qatar has used international court proceedings as a means of putting pressure on States that have imposed restrictions against it in order to force them to lift their restrictions. This strategy has paid off. At the same time, Qatar’s judicial “sanctions” war has highlighted in a new way some of the nuances and problems of both specific courts and international justice in general. First of all, the departure of the International Court of Justice from its earlier practice of adhering to the positions and interpretations made by human rights bodies looks unusual and inexplicable. This has caused criticism from representatives of the academic community, who reproached the Court for missing an excellent opportunity to once again consider the issue of its interaction with human rights treaty bodies, leaving open the question of who should play the leading role in interpretation of the Convention. Additionally, it should be noted that all the international judicial bodies involved in the legal proceedings initiated by Qatar evaded an assessment of the underlying dispute – whether Qatar actually violated the Riyadh Agreements and whether the actions of States that imposed sanctions were legitimate and proportionate as countermeasures under modern international law on a State’s responsibility. Of course, Qatar could be blamed for forum shopping but, strictly speaking, this strategy is not prohibited by international law. Nevertheless, Qatar’s experience in applying to various international courts and tribunals encourages and will encourage other States to resort to international law to resolve conflicts.

JUDGMENTS OF THE 19TH – THE FIRST HALF OF THE 20TH CENTURY: AN ANTI-MODERNIST ANALYSIS

This article is based on two considerations. According to the first, modern international law is a product of postmodernity, the main characteristic of which is the decline of metanarratives. In relation to international law, this means rejection of the liberal reform project which was its very essence at the turn of the 19th and 20th centuries. Instead there is a reorientation to the maintenance of bilateral relations, the consequent decline of the theory and the flourishing of judicial law (case law), which represents a set of autonomous and competing private (private law) narratives. The second thesis is that the progress of international law is not necessarily linear: it is quite possible that overcoming the crisis in which it finds itself today is feasible not through the development of existing ideas and institutions but through the resuscitation of ideas and political projects of the past. The anti-modernist analysis of international law should not be limited to a purely theoretical dimension but should be extended to law enforcement practices. This article discusses some of the original practices and approaches used by international courts in the 19th and first half of the 20th centuries that are not currently used by them. Among these are methods of working with facts (non-reduction) and methods of interpreting international treaties (e.g., priority of the intentional approach), regular judicial activism, ex aequo et bono dispute resolution, a combination of the judicial function with conciliation, the determination of legal regimes at the request of the parties, and the refusal to disclose motives. The author identifies some categories of cases, the share of which in the practice of international courts has decreased compared to the previous period, and explains the reasons for this. Among these are cases related to the exercise of diplomatic protection, clarification of special territorial regimes, interpretation of peace treaties, succession, and some others. The general conclusion is that international courts from the first half of the 19th century through the early 20th century were quite different from modern courts. First, they were greatly influenced by the natural law tradition (or its inertia); secondly, they used not only rational but also charismatic legitimation mechanisms; thirdly, they saw their task not only in the interpretation and application of international law but also in its development; and fourthly, they used a number of original approaches and practices. Some of these practices look archaic, while others could be rehabilitated and used by modern courts.